All Hands to the Sound Deck for Outwith Festival 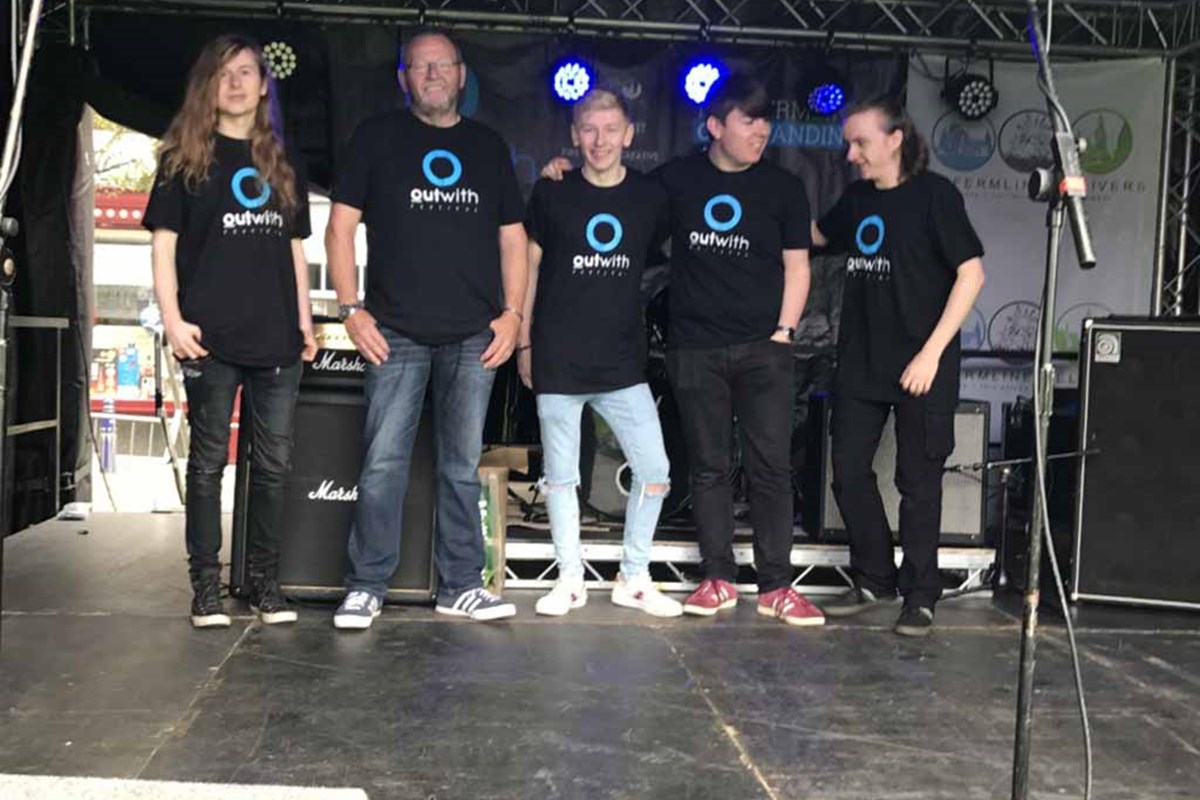 It was all hands to the sound deck for the new intake of Sound Production students at Fife College as they helped ensure performers at Dunfermline’s recent Outwith Festival could be heard.

Just a few days after starting their HNC and HND courses the new students were helping to set up all the sound requirements for the 2018 cultural showcase under the watchful eye of ex-student Duncan Aitken of Substation Studios in Rosyth. The event took place across a number of large outdoor stages and intimate indoor venues throughout the town centre.

The Outwith Festival doubled in size this year providing the ideal opportunity for the new students to be thrown in at the deep end, while working alongside former students who are just about to graduate from the College’s Stenton Campus in Glenrothes.

The students were involved in preparing and checking PA systems before installing them and then managing the actual sound production at the venues during the five-day event held earlier this month.

One of the biggest events the students helped at was the gala performance by the Scottish Philharmonic Orchestra Big Band at the Glen Pavilion outdoor stage in Pittencrieff Park. Despite a deluge of rain just before the show the students hard work ensured that the event went ahead to an appreciative audience who were then bathed in sunshine as the weather took a turn for the better.

Mature student Raymond Thomson, who has just started HNC: Sound Production, said: “This was an amazing baptism of fire to gain experience in live sound to help with our studies.

“The whole Outwith Festival has not only been a fantastic learning experience, but it was a great opportunity to meet people and make contacts from the Sound Production industry.

“All students involved agreed it was a brilliant insight into what a career in sound production entails – while also getting first-hand experience of the preparation and logistics that are also involved.

“Although it was hard work, the knowledge that we played a part in the Festival’s success is a fantastic feeling.”

Bill Thaw, Lecturer in Media who was instrumental in the students being involved, said: “The students gained invaluable experience at the Outwith Festival, even though many had just started their course.

“It was a great chance to show that at Fife College you won’t just gain skills, but also the confidence to use them.”

Fife College offers a range of courses in Sound Production. To find out more about forthcoming Open Events, call the College on 0344 248 0115.​