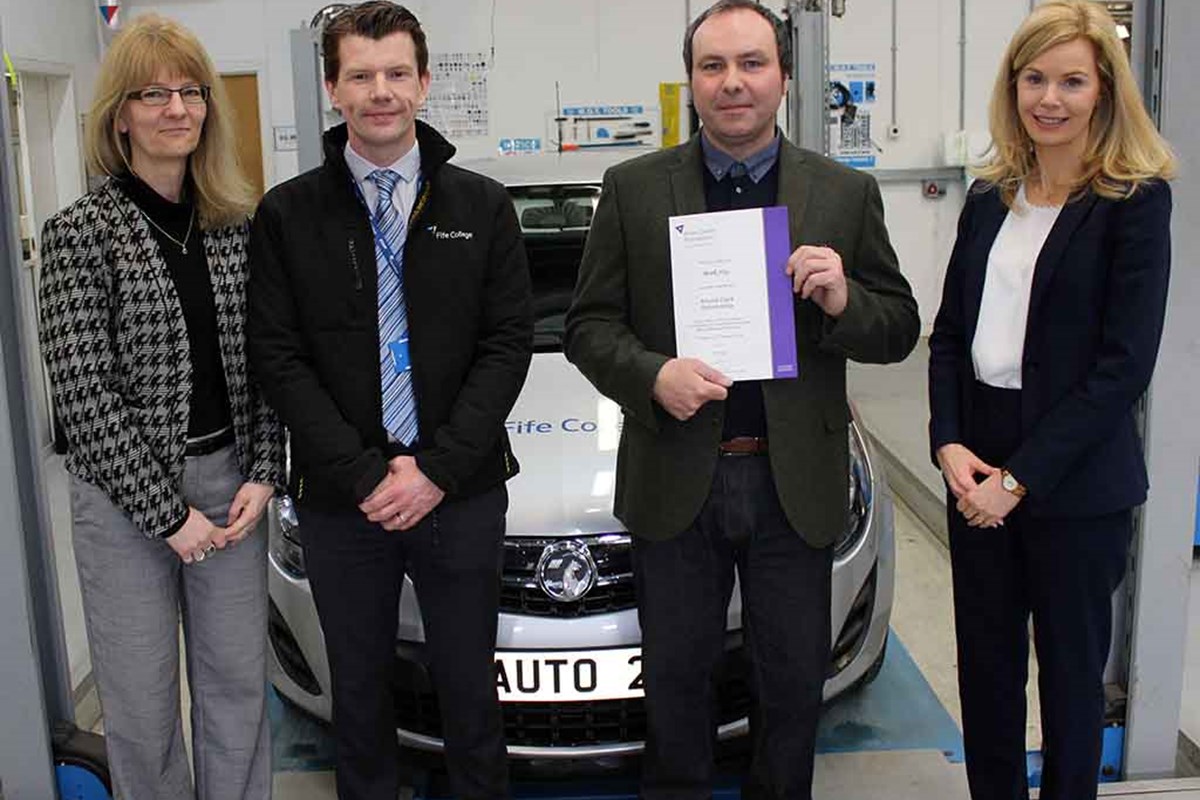 Dorothée Leslie, Stephen Ayton, Mark Hay, Carol Henry in the vehicle workshop, Stenton Campus.
A Fife College student, who studies automotive engineering, has been awarded a scholarship from Arnold Clark for his commitment to his studies.

The award was made to the former Police Officer, Mark Hay from Kirkcaldy, at a special presentation held at Fife College’s Stenton Campus in Glenrothes.

Dorothée Leslie, Vice Principal for Academic Strategy, welcomed Mark to the event and presented him with his certificate on behalf of the Adam Smith Foundation, the College’s scholarship trust.

Carol Henry, Group People Director at Arnold Clark, who are sponsors of the award, also attended the event and enjoyed hearing more about Mark and his plans for the future.

Mark, 45 took the decision last year to turn his life around and change career, one that he first embarked on almost 30 years ago.

After leaving High School Mark became a tyre fitter and mechanic but unfortunately the company he worked for went bust. He decided to join the Army and then became a Police Officer within the emergency response unit.

Said Mark: “Fixing car engines is my first love and I am really enjoying being at College, it is something I have always wanted to do. I am also fortunate to have had great careers in the Army and Police. Leaving the Police was a big decision for me last year as I had been in the force for 17 years. I felt, however, that the time was right to make the change, to improve my work-life balance and also broaden my skills.

“I am delighted to have won an Arnold Clark Scholarship which proves to me that I have made the right decision in changing career – it’s great to be recognised for the hard work I’m putting in. Part of the scholarship includes a placement with Arnold Clark and I am excited to see what this may lead to.

“Long term I’m looking forward to becoming a qualified engineer and to have more time to spend with my family in a job I love. It can be scary taking the initial leap but I would recommend it to anyone.”

Carol Henry, Group People Director at Arnold Clark said: “Arnold Clark is committed to taking on board the right people – people who have the passion and skills to help keep us at the forefront of our industry.

“Supporting this scholarship through the Adam Smith Foundation and the College enables us to meet first-class students, recognise their achievements and provide a range of opportunities to help them progress in their careers.”

“Mark is a very deserving award winner and a credit to the College. I would like to congratulate him on his achievement and thank Arnold Clark for their continued support.”

Part of the scholarship includes a placement and possible job opportunity for Mark with Arnold Clark which he will begin in the coming months.

The award of £1,000 was made through the Adam Smith Foundation, a unique programme that helps hundreds of students each year by giving them a helping hand and recognition which provides them with the boost they need to progress their studies and begin their career.