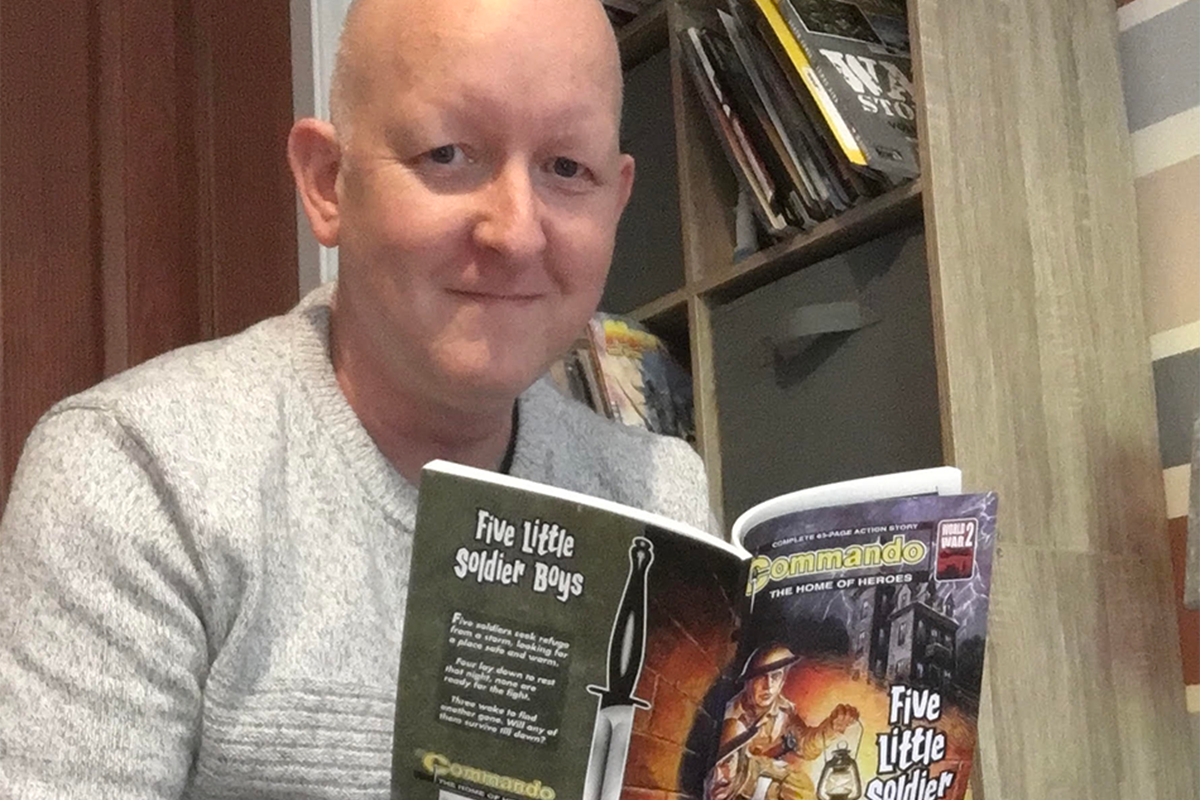 Animation and Computer Games lecturer Colin’s ‘Five Little Soldier Boys’ story has been included in the latest issue of the famous military comic series which has been running since 1961.

A murder-mystery set during wartime; Colin’s Five Little Soldier Boys story tells the tale of five soldiers taking refuge from a storm in an old French chateau but are unaware that a killer is lurking. The story mixes the war genre with that of murder-mystery but also has quite a bit of humour.

Colin, who is based at the College’s Dunfermline Campus, has been writing comic book stories in his spare time for a number of years and has been published in various comic titles, but this is the first time his stories have been published in the Commando series.

Colin will also have a number of further stories published in the popular series over the next twelve months.

“It's very exciting to be published in such a long-running series like Commando. They’ve commissioned four stories which all have quite a mixture of different characters and locations.

“One was inspired by the fortified islands in the River Forth, and the story begins and ends in Scotland, with the characters going to war in the North African desert in-between.”

Colin, who has been with the College since 1999, started to write his comic stories after being inspired by a project with students in 2013. One of the students involved in the project, Michael Philp, has also worked on several comics with Colin since he left college and has gone on to develop his own a part-time career in comic book illustration. Colin added:

“I was doing an animation project with my class in 2013 and we were creating animations about King Robert the Bruce. I'd hoped to make them into a lengthier story with some live-action sequences, but in the end, turned the script into a comic book. That was really the start of my own comic book adventure!”

“It’s been good to work with Michael on a number of comics in the last few years too and I’m really proud to see him use his brilliant illustration talents to make a part-time career for himself in comic books.”

Colin has also self-published a number of true war stories and recently finished ‘Flight of Eagle’ which highlights the story of a Polish submarine, ‘Orzel’, which escaped form the Baltic Sea to joining Allied Forces in Rosyth at the start of World War Two.

He is now looking forward to writing more stories and has a number of ideas up his sleeve for the future issues of Commando. He said:

“The stories take quite a bit of time to make sure they are historically accurate, but it’s been a great journey so far. I’m particularly interested in telling more stories based in the local area as I don’t think many people know about some of the amazing historical events happened right here in Fife.”

Photograph: Fife College Animation and Computer Games lecturer Colin Maxwell is pictured with a copy of the Commando issue which features his Five Little Solider Boys story on the cover