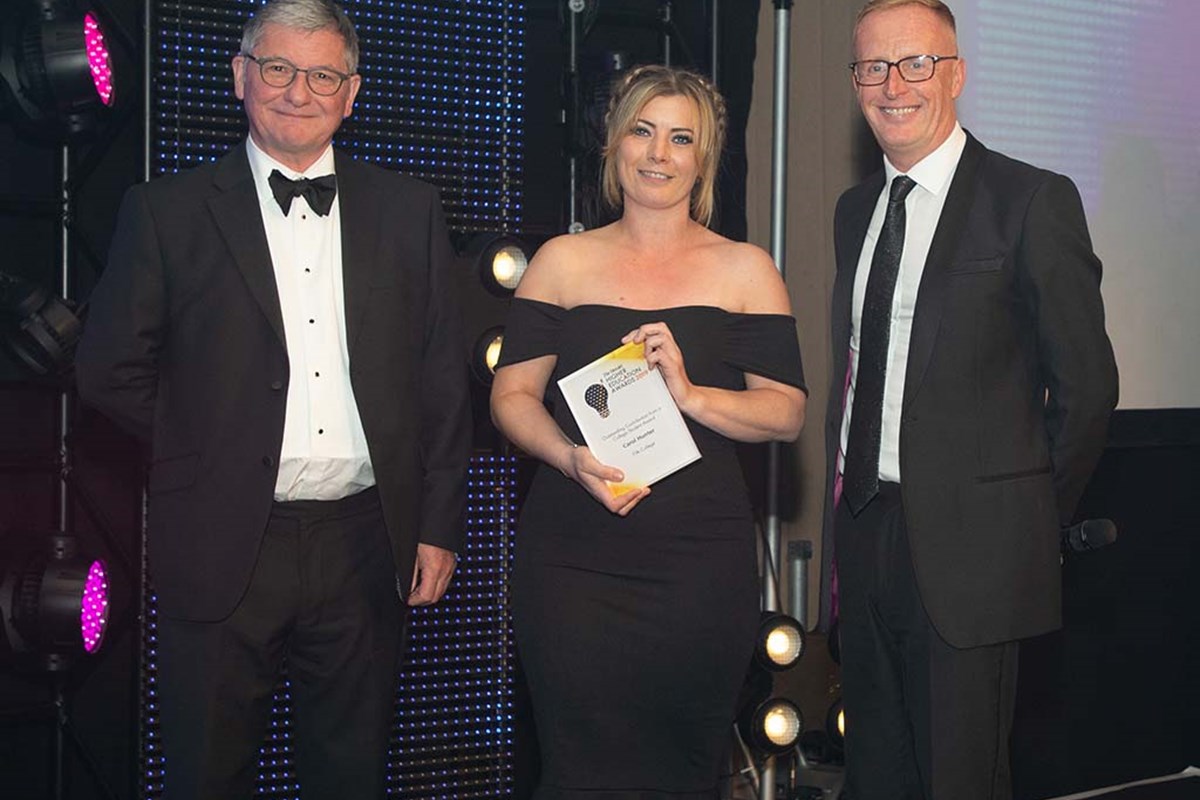 Pictured above - Outstanding Contribution from a College Student Award: Barclay McBain, Executive Editor of the Herald and Carol Hunter with host Bryan Burnett

It was a double celebration for Fife College on Wednesday as it picked up two awards at the prestigious Herald Higher Education Awards, held at the Crowne Plaza Hotel in Glasgow.

Now in their fifth year, the awards recognise outstanding higher education institutions in Scotland with the majority of entries coming from universities. Fife College was thrilled to have been recognised by the judges in six categories and delighted to pick up two award wins on the night – Outstanding Contribution from a College Student and the Partnership Award

It was cheers all round when Student President Carol Hunter, from Dunfermline, was announced winner of the Outstanding Contribution from a College Student Award. Carol is certainly outstanding, picking up the award for her dedication and drive in her roles as Women’s Officer, Care Experienced Officer, Student President of the Fife College Students’ Association (FCSA) and in her work with the Boards of both Fife College and the Adam Smith Foundation.

Carol was also recognised for the wide range of fantastic work she has carried out on behalf of the College’s students which includes increasing scholarship opportunities for students, which has resulted in more than double the applications than in previous years while recognising and celebrating the commitment and dedication of learners. In addition to her Student President role she has used her past life experiences to drive forward the College’s work on supporting care experienced young people. Carol’s passion for her role has also resulted in her being invited to speak at the Scottish Parliament and also as key note speaker at various national events, celebrating care experienced young people and the importance of college articulation routes.

Amazingly, Carol has achieved all of this while studying for a degree in Social Science through the Open University and balancing her family life as a Mum of three young boys.

Said Carol: “To be nominated for such a prestigious award was really exciting but to then win it was overwhelming – the standard was so high I did not expect it.

“This has been a fantastic 12 months for me - I became Student President, passed my HND in Social Sciences and began my OU degree. I’ve also been delighted to speak at various high profile events to raise awareness of care experienced young people and the importance of college as an alternative option to University for students.

“This amazing award win, alongside the experience and qualifications I am gaining through Fife College, will hopefully enable me to secure a great career in the future which supports people coping with the effects of adoption and difficult transitions in life.

“I would like to thank my colleagues in the FCSA, Fife College and my family for their continued support and encouragement, as without them, none of this would have been possible.”

The second award win for Fife College on the night was for Team Sally, a unique health and wellbeing project led by staff working in Fife College’s Learning Centre at HMP Cornton Vale. The staff picked up the Partnership Award category for their joint work with the NHS and the Scottish Prison Service.

Team Sally is an exciting initiative which is making a difference to the health and confidence of learners. On sign up, learners receive a ‘Team folder’, including a diary log book, calendar, pedometer and relaxation CD.  Women are encouraged by a range of “Team Sally characters” including Positive Polly and nicotine dependant Ash-lea, to work through challenges and receive rewards. Learners also complete a range of qualifications in Personal Development, Health and Wellbeing Awards, Nutrition, Sport and Fitness and Core Skills.

Audrey Mitchell, Head of Prison Contract, Learning and Skills Services at Fife College said: “We are delighted to win this partnership award. A great deal of work has gone in to Team Sally which is making a huge difference to the health and wellbeing of our learners at HMP Cornton Vale. It is great to be recognised for our hard work, especially when you see the amazing range of projects going on in universities and colleges across the country.”

Hugh Hall, Fife College Principal, said: “I am delighted that the College’s Student President Carol Hunter has been recognised for her Outstanding Contribution - very well deserved.  We are also very proud of our colleagues and partners at HMP Cornton Vale – a fantastic partnership that significantly improves the life chances of women prisoners.  Congratulations also to our other finalists – their success reflects  the work we do every day across Fife College to help transform the lives of our students.”