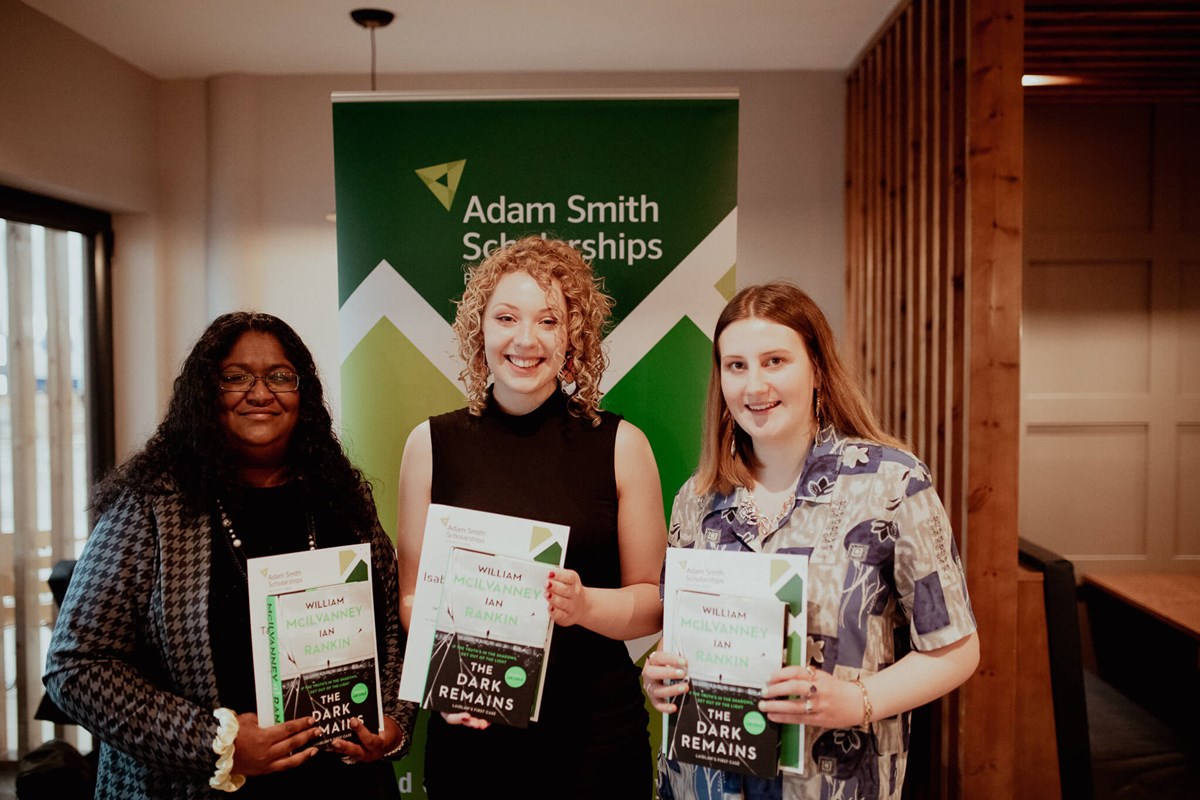 Three Fife College students have been awarded special scholarships by one of the world’s leading crime writers, Sir Ian Rankin.

Offered through Adam Smith Scholarships, part of Fife College, the Ian Rankin Scholarship is open to all full-time students, giving everyone with a creative flair the opportunity to submit a piece of writing and have their work read and judged by the recently knighted author.

As well as the chance to meet with Sir Ian in the future, the winning students received a monetary award of £600 each to support their studies.

Isabella, Sam and Tamzin also received certificates to mark their achievement, as well as a copy of Ian’s award-winning book, ‘The Dark Remains’, at a special presentation event which was held at The Academy training restaurant on the College’s Kirkcaldy campus.

“I was amazed when I saw that I had won, not only because the support will be invaluable to finance my further studies, but also because it has allowed me to prove to myself that this is something I am good at.

“I now have an unconditional place at the University of Glasgow to study Scots Law and History, and this award will make a huge impact on tuition and course costs.”

“I am elated to win the scholarship. It has boosted my confidence in my writing and my belief in myself. I am planning on spending the money on some learning support software, writing supplies and essentials”.

“Being able to be a part of and win this scholarship was an amazing opportunity for me to put my creative energy into a project with a very valuable prize.

“The money allows me to fund another creative project and have some more freedom within my journey as an actor.”

Sir Ian, who has was knighted on the Queen’s Birthday Honours list on the eve of the Platinum Jubilee, said:

“I was delighted to award this year’s scholarships to Isabella, Sam and Tamzin. There was a great range of entries, all of which were of a high standard, and I thoroughly enjoyed reading through them all.

“It was unfortunate I was unable to attend the presentation event in person this year but I’m hoping to visit the College at a later date to get the chance to chat with this year’s scholarship winners.”

“This is the 18th year of Sir Ian’s award, which has inspired and supported over 50 students since 2004.

“To have a world-renowned author like Sir Ian Rankin continue to support our students in this way is amazing and we are grateful for his ongoing support.

“We are also pleased that we opened the scholarship to all students a few years back, which has led to high-quality entries from all areas of the College.

“Congratulations to winners Isabella, Sam and Tamzin, who were thoroughly deserving of this year’s awards.”

Adam Smith Scholarships, part of Fife College, is one of the largest college scholarship programmes in Scotland, awarding thousands of pounds each year to support students, develop opportunities, open doors, and transform lives.

"Powerful and fascinating stuff, and quite a challenge to present Medusa in a staged setting and as the hero rather than villain! The heightened prose is apt and works well and this extract is very promising indeed."

Tamzin McDonald - The girl next door

"This is the really creepy tale of a really creepy guy who stalks his neighbour. It is tense and well-written and, while nodding towards Hitchcock's 'Psycho', manages to comment on the modern phenomenon of stalking as well."

"An evocative piece of nature writing. Such a positive and life-affirming piece with a good eye for the details of the changing seasons. I was waiting for a twist in the tail but this turned out to be a warm hug of a story."