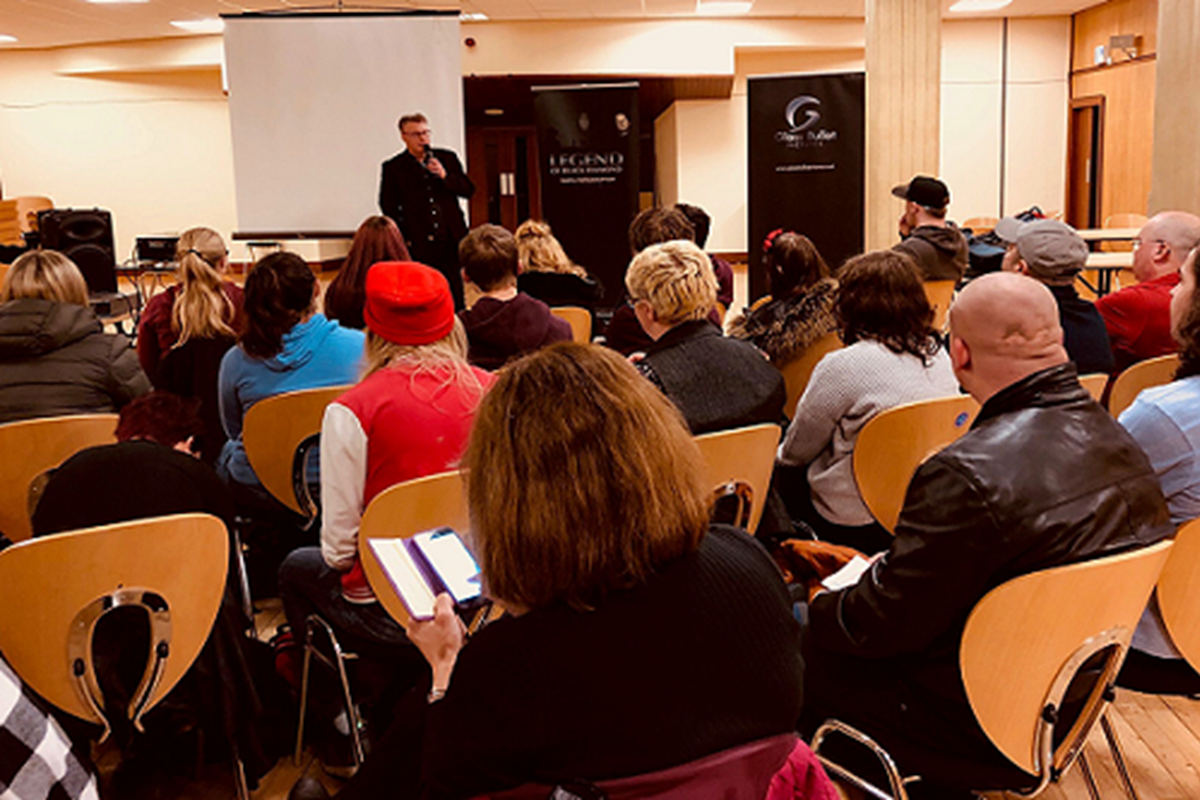 Organised by Fife College, with support from the Creative Media Network, the Two Rivers Film Festival showcased the work of film makers in Fife and others from around the country.

The Festival included a wide range of workshops, short film screenings and a red carpet event with the showing of ‘The Black Gloves’, a feature length film directed and produced by former Fife College student Lawrie Brewster.

Lawrie, who has produced seven films, also led workshops at the Festival alongside fellow ex-student Alex Harron and College lecturer Graeme Campbell. Representatives from Business Gateway and TayScreen were on hand to speak with those in attendance too.

The Black Gloves, which closed the festival in the evening, is a prequel to Lawrie’s 2013 debut horror film Lord of Tears. Set during the 1940s, it tells the story of a psychologist that soon finds himself at odds with the Owlman, a sinister owl-headed figure.

Douglas McMillan, Director of the Faculty of Creative Industries at Fife College, said: “The Two Rivers Film Festival was a fantastic opportunity to showcase the amazing array of filmmaking talent we have here in Fife and others from around Scotland.

“It was brilliant to have previous students, who have gone on to achieve great things in the industry, attend to pass on their experience and knowledge to current students and others who came along. Hopefully this will be the first of many successful Two Rivers Film Festivals.”

Lawrie Brewster, who started his career in film after studying television and production at the College’s Stenton Campus, said:

“The Festival was a great opportunity to share my knowledge and experience with folks who are interested in acting, writing, directing and producing. It was really exciting to work with the College to help bring the Festival together and hopefully it can become an annual event in Kirkcaldy.”

Lawrie, who went on to study Film and Photography at Edinburgh Napier University after graduating from Fife College, added:

“Fife College gave me the start and got me motivated to get into the creative industries. The courses were a great opportunity to study but also practice what you will then go on to do as a career.”

College journalism students also played their part in the festival, covering the event as part of their coursework.

The Creative Media Network is a collection of industry providers (including the BBC), universities and colleges that aim to make closer links with industry and education providing opportunities across the creative industries and primarily film and media.