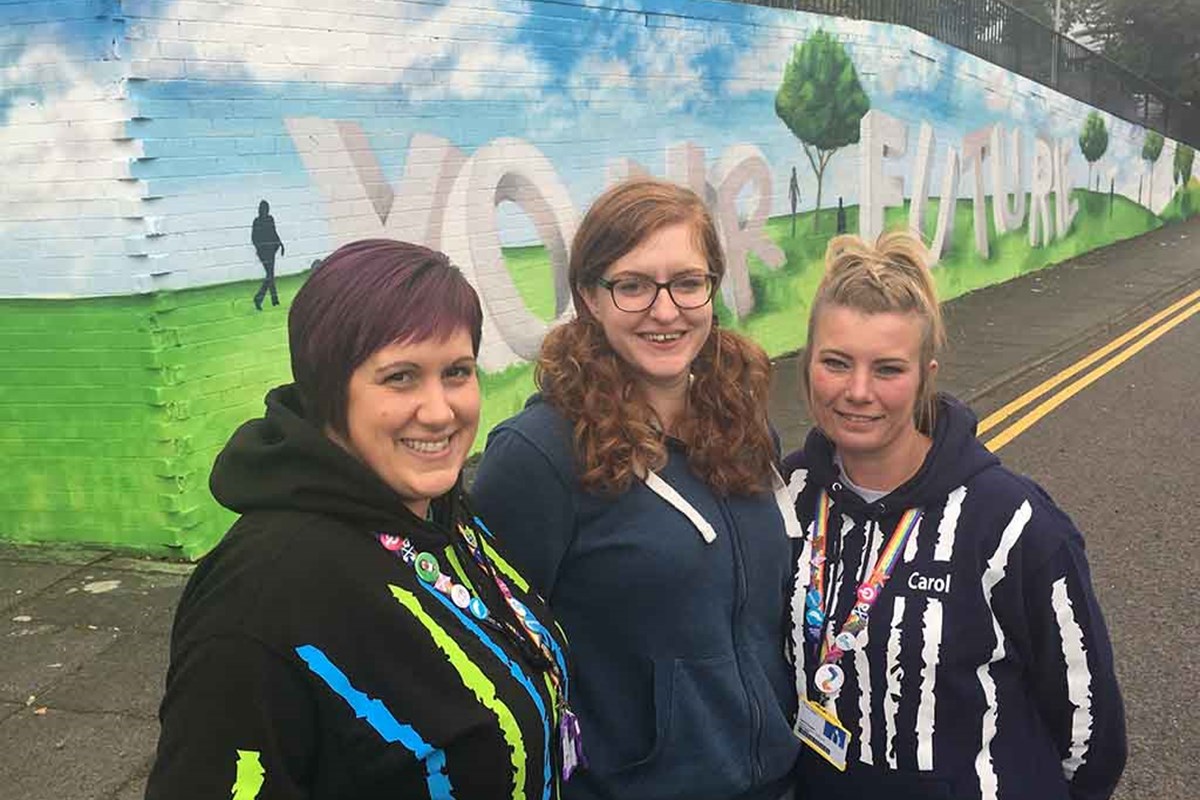 Community artist, and former Fife College student Kerry Wilson, has completed her latest project to make Fife brighter and better by painting a mural on the front wall of the College’s Halbeath Campus in Dunfermline.

The mural was commissioned by Fife College Students’ Association (FCSA), as part of their work to celebrate 2018 as the Year of Young People.

An inspiring slogan ‘Create Your Future’ sits among paintings of trees and patterns which blend in to the surroundings, adorning the wall for all to enjoy including students, staff, local residents and passers-by.

Kerry, 32 from Kirkcaldy, started her own business as a community artist three years ago and has been commissioned to paint external designs across Fife to help revitalise areas including walls, walkways and shop shutters.

One of Kerry’s most recognisable works is the mural of a miner boy, on the side of Brunton House, Cowdenbeath, which is thought to be one of the largest murals in Fife. The Fife College mural is one of her longest at around 50 metres.

Young people from across Fife got the chance to help Kerry with the project and she was particularly grateful for assistance received from two Fife College design students Kai Colston and Barry Lamont.

Kerry has always enjoyed art and previously studied illustration and media design which allowed her to secure a position as a graphic designer after leaving college. She was involved in youth theatre when she was young and enjoyed painting large sets which gave her the bug for painting on a large scale. This led Kerry on to work as a Youth Worker for Fife Council and then the decision to become self-employed as a community artist. As well as producing murals, Kerry has a studio in Kirkcaldy which she uses to plan her large scale projects and also work on finer illustrations and artwork.

Said Kerry: “I’ve really enjoyed creating the College mural and it was great to meet so many people willing to lend a hand – that’s what community art is all about! I’ve had loads of positive feedback from the Fife College mural which I am delighted with – it’s great to produce something which you know will be seen and hopefully enjoyed by so many people coming in to Dunfermline.

“At school I could have gone to University but felt it wasn’t for me. I will always be thankful to Fife College as it is the skills that I learnt there which I am using and making a living from. I enjoy coaching others and so hope longer term to employ some staff to help me out and grow my business.”

Jen Anderson, FCSA President for Welfare and Equality, said: “We wanted the mural to be led by our students so that they could get a real sense of belonging to the campus and their local community. It was great to see our group of 30 volunteers, from as young as 6 years old, working together to create this mural.”

Julia Sherriffs, 19, is currently studying Events Management at Fife College and was excited to be involved in the project. Said Julia: 'It was great to be able to work on a project that's quite bold and helps to brighten up our local community. I think sometimes the imagination and work of young people is undervalued and being able to work as a team and create this work of art has shown how much we can achieve!'

Sean MacDonald, 14, a local high school pupil and volunteer explained how this project has helped him towards his personal goals. Said Sean: ‘It has been such an exciting project to work on, especially as I hope to have a career in art and have an interest in spray painting as a technique. I have really developed my skills as an artist and Kerry is an inspiration, it has been so valuable learning with professional guidance. I have really enjoyed seeing the impact the art has on the local community and I hope to work on more projects like this in future to make Dunfermline a more vibrant community to live in.”

Peter Ross, 15 who is currently studying Access to FE at Fife College added: “It has really been a good team building effort painting the mural. Especially with members of the public coming over to tell us how good it looks and what a good job we have done. Every time I see it I’ll think ‘I did that!’ and feel very proud.’