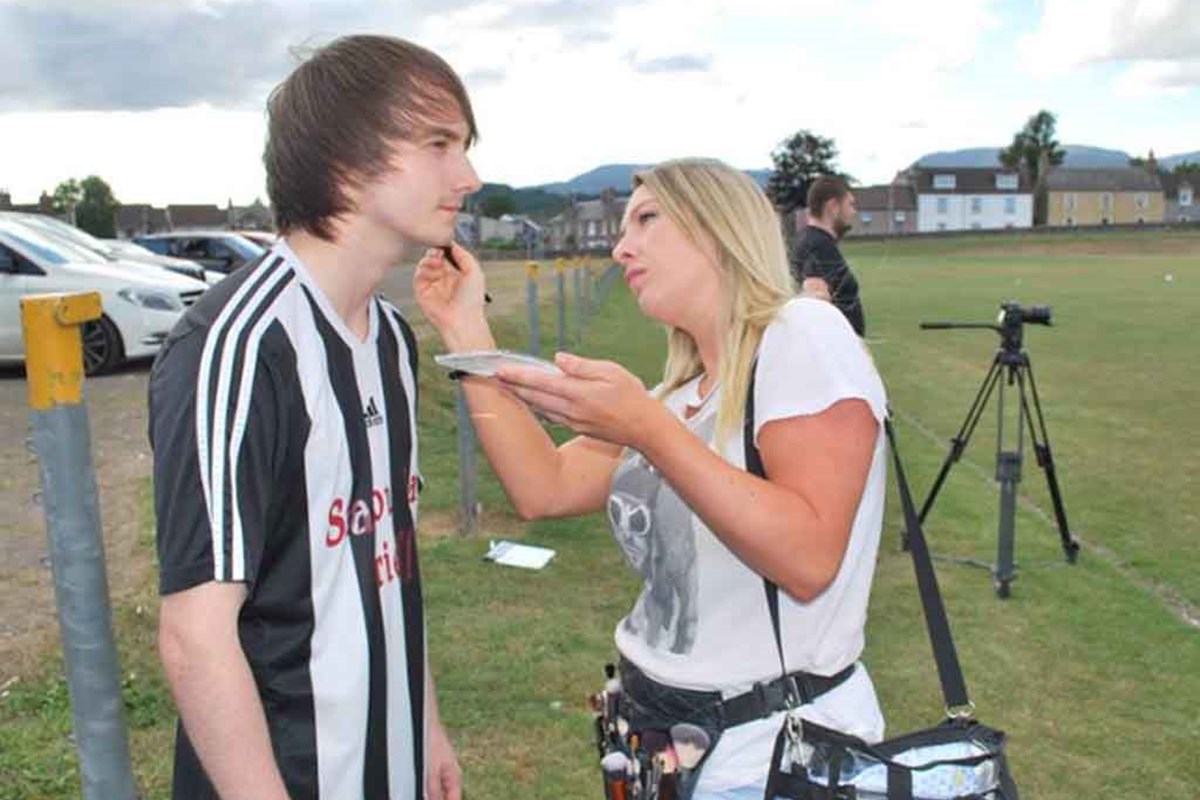 Hazel Smith working on location on the set of romantic Scots comedy GetMeLovedUp.com

It’s been a case of “lights, cameras, action” for Make-up Artistry student Hazel Smith who has been starring on the sets of several movies after qualifying from Fife College.

Hazel, from Cowdenbeath, has been working as the hair and make-up artist on the new Scottish feature film GetMeLovedUp.com – a comedy about online dating.

Hazel’s latest role, behind the movie lights and cameras, follows on from a range of previous contracts working on a series of home-grown Scottish films.

The working mother of two broke into the glamorous film industry while studying HND: Make-up Artistry at Fife College which she completed in June. Her qualification marked the end of a four-year studying journey – which she began with Intermediate Certificate: Introduction to Make-up Artistry.

Hazel said: “I started doing freelance make-up while I was still studying at college as a mature student and began to build up my confidence and skills. In my final year I started working on short films and assisting make-up artists on feature productions.”

Hazel was delighted to be offered the position on the feature film GetMeLovedUp.com after coming to the attention of Scots director George Carson who runs Blazebuster Productions which is funding the ambitious project by crowdfunding.

Having worked at the College’s Halbeath Campus a few years ago as part of the Student Information team Hazel is no stranger to Fife College. She added: “After having my second son, I decided not to return to work but instead to do what I’ve always wanted to do – make-up.

“Studying Make-up Artistry at Fife College was lots of fun, but also a lot of hard work. I feel very lucky I had great tutors, and an amazing group of girls in my college class – they all made my college experience one I’ll never forget.

Hazel feels that the course was a useful stepping stone into her ambition to work in the film industry. “The course is great for giving you the basic knowledge needed to go into films and start your career. My tutors gave me the confidence to start applying for jobs and lots of useful information about working in films and television from their experiences in the industry.”

Hazel has also been adding to her movie credits working on hair and make-up recently on a short magic-realist film called The Rocket Ship and a time travel, horror, science fiction comedy called Flux.

“I really enjoy being on film sets as every day is different and every production requires different hair, make-up, and special effects.”

Fiona Craig, Curriculum Manager for Hair, Beauty and Make-up Artistry said: “Hazel is a great example of a student who has applied herself to her studies - she was motivated and focussed from NC Level 5 right through to HN.

“Hazel has the right attitude to succeed in industry, she is professional and dedicated to make-up artistry. Through her studies at Fife College she has gained all the necessary skills and knowledge to work on movies and other projects. I am sure she will go far and I look forward to seeing her name appear in the credits.”

Fife College offers a wide range of courses in Make-up Artistry. For further details come along to our forthcoming Open Events or call the College on 0344 248 0115.