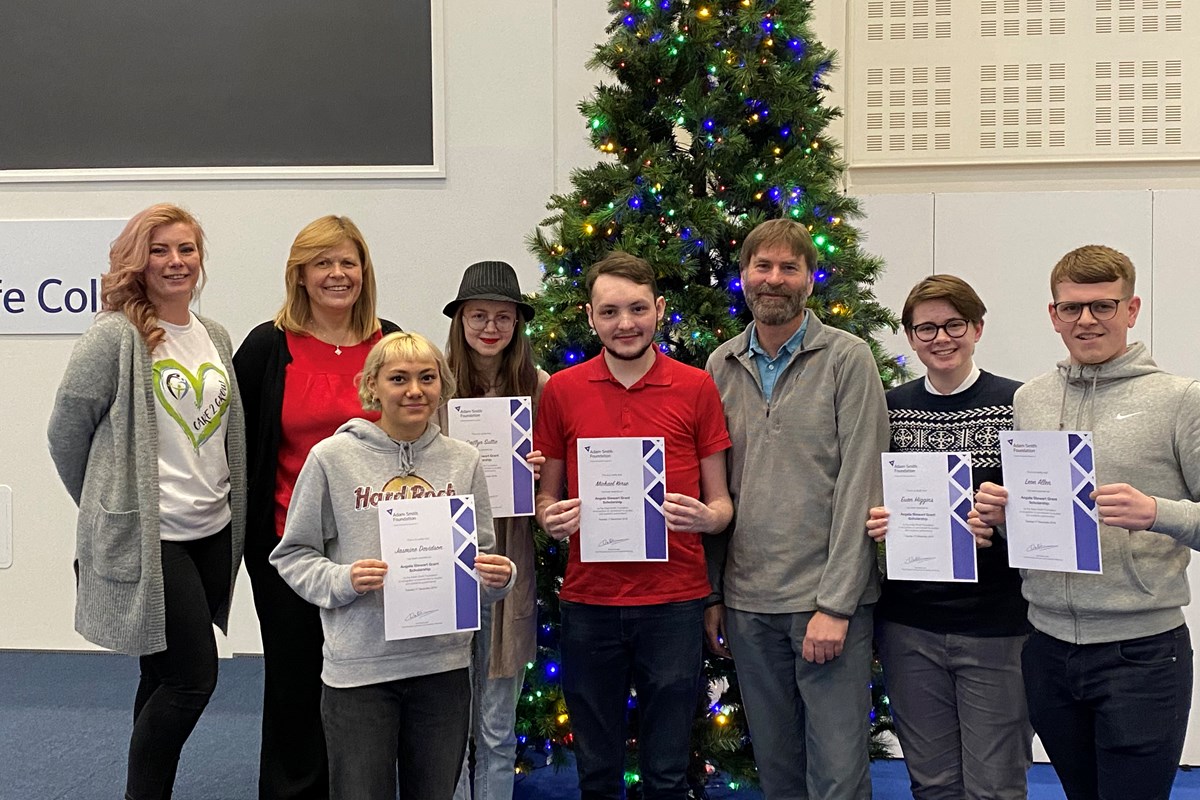 Christmas has come early for five talented Fife College Science students who have been recognised for their commitment to their studies and awarded a scholarship in memory of former student, Angela Stewart-Grant.

The award was made through the College’s scholarship programme, the Adam Smith Foundation at a special presentation held at the College's Kirkcaldy Campus.  The students received a share of £1,100 and were presented with certificates by Academic and Quality Manager for Science, Yvonne Bayne.

Also attending the presentation was former staff member and friend of Angela’s, Nigel Cottam, who spoke fondly of Angela and was confident that she would be delighted with the choice of students receiving a scholarship in her memory.

Four of the winning students went through an application and interview process to be shortlisted while Michael Kerse was delighted and surprised to have been nominated by the staff for his hard work and dedication to his course.

The Angela Stewart-Grant Scholarship was set up 20 years ago, in memory of Angela who was from Brechin and who sadly died of bowel cancer in 1999, aged 23. The Scholarship was created by her Mum, Sandra, to give hard-working and committed students a little extra money to treat themselves while studying, especially around the festive season. Sadly, Sandra also passed away a few years ago.

Thanks to a donation in Sandra’s will and the support and contributions from the College’s Science staff over the years, Angela’s Scholarship has continued to flourish and support students each year.

Most of the students are keen to put their scholarship money towards buying a new laptop and as per Angela’s wishes also treat themselves over the festive season.

Said Lyn: “Yvonne and I were extremely impressed with all of the applicants all of whom have a passion for Science. Michael in particular has shown great commitment to his course and we were delighted to award him £500 to support him as he completes his course and goes on to university or in to an apprenticeship.

“We hope that all the award winners remember to use some of their scholarship to treat themselves as this was something that Angela insisted her scholarship was used for.

“Receiving a scholarship is a great achievement and can make a substantial difference to a student giving them the support they need to keep going. We are looking forward to the New Year and rolling out our wide range of scholarships to support students across all faculties and levels of study, all thanks to the Adam Smith Foundation and our very generous donors.”

For further details about the Adam Smith Foundation, other scholarships available at Fife College visit our scholarship pages.