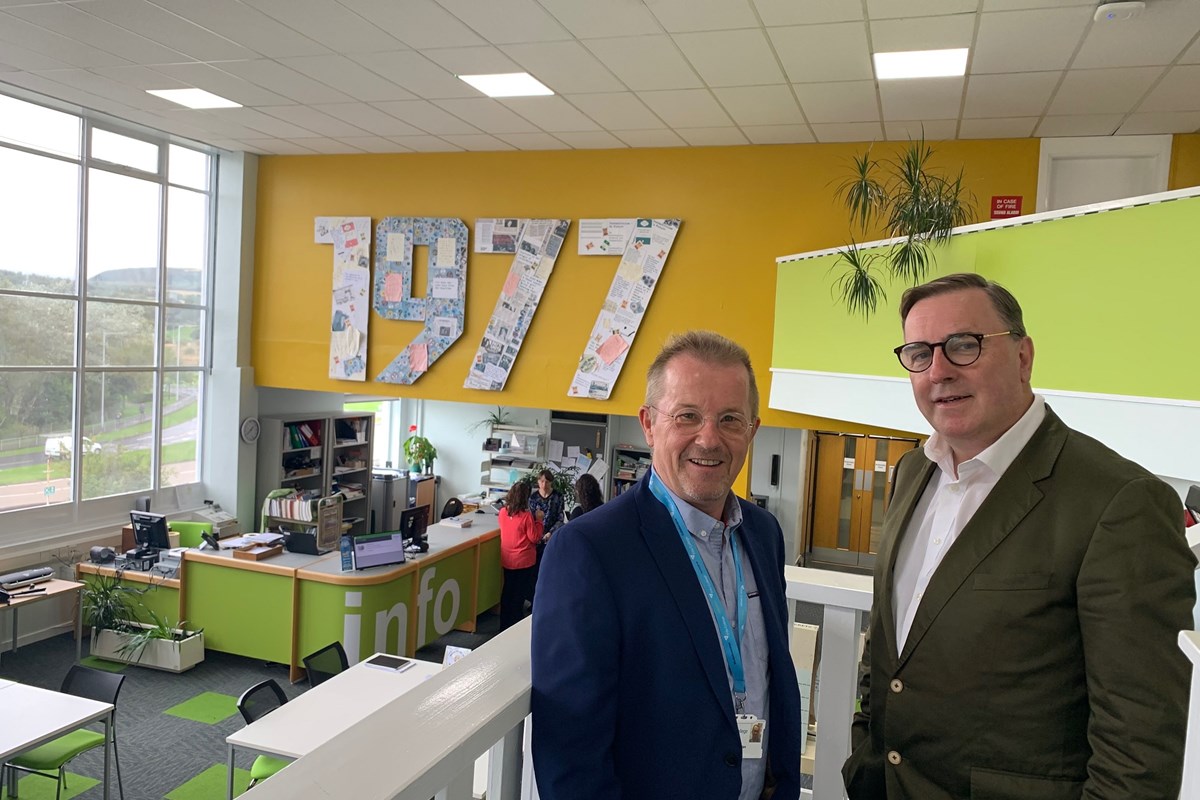 Dougi McMillan, Director of Creative Industries at Fife College and Ronnie Gurr are pictured in Fife College’s Dunfermline Campus library with the 1977 collage in the background.

The “1977” wall-to ceiling collage, which features hand-written song lyrics, press cuttings and other memorabilia from the era, honours the band which formed in Dunfermline in 1977.

Created by The Skids frontman, Richard Jobson and music industry entrepreneur Ronnie Gurr, the artwork was previously exhibited at the Fife Carnegie Library and Galleries and the Fire Station Creative in Dunfermline.

A number of the College’s library spaces have been renovated this summer to make more creative and inspiring spaces for students to study and learn.  Both the Dunfermline and Kirkcaldy Campuses have been repainted and had new flooring and furniture installed while a new RFID security system for resources has also been fitted.

The upgraded libraries offer students flexible study space, supporting collaborative learning with group study booths as well as individual study space. Some of the new furniture pieces also have integrated power, making it easier for students to use technology to help their learning.  Further improvement works are planned for the coming months.

Dougi McMillan, Director of Creative Industries at Fife College, said: “We are thrilled to have this unique piece, created by Richard and Ronnie, on the wall of our Dunfermline Campus Library.

“The collage is a real feature in the library and a great finishing touch to the recent improvement works that have been completed in the library.”

Ronnie Gurr said: “It is great the piece has found a new home in a centre of creativity.  1977 was not only year zero for punk rock but it also opened doors for a whole generation to be truly creative in a variety of areas.  I hope the piece will provide a bit of creative inspiration for this generation.”

Amongst Ronnie Gurr’s many music business interests he is the publisher of Hanging Around Books which specialises in music-related photobooks.

The books are A5 sized paperback photobooks and photozines that carry on the legacy of Hanging Around - a punk fanzine founded by Ronnie in 1977.  More information about Hanging Around Book can be found on their website.