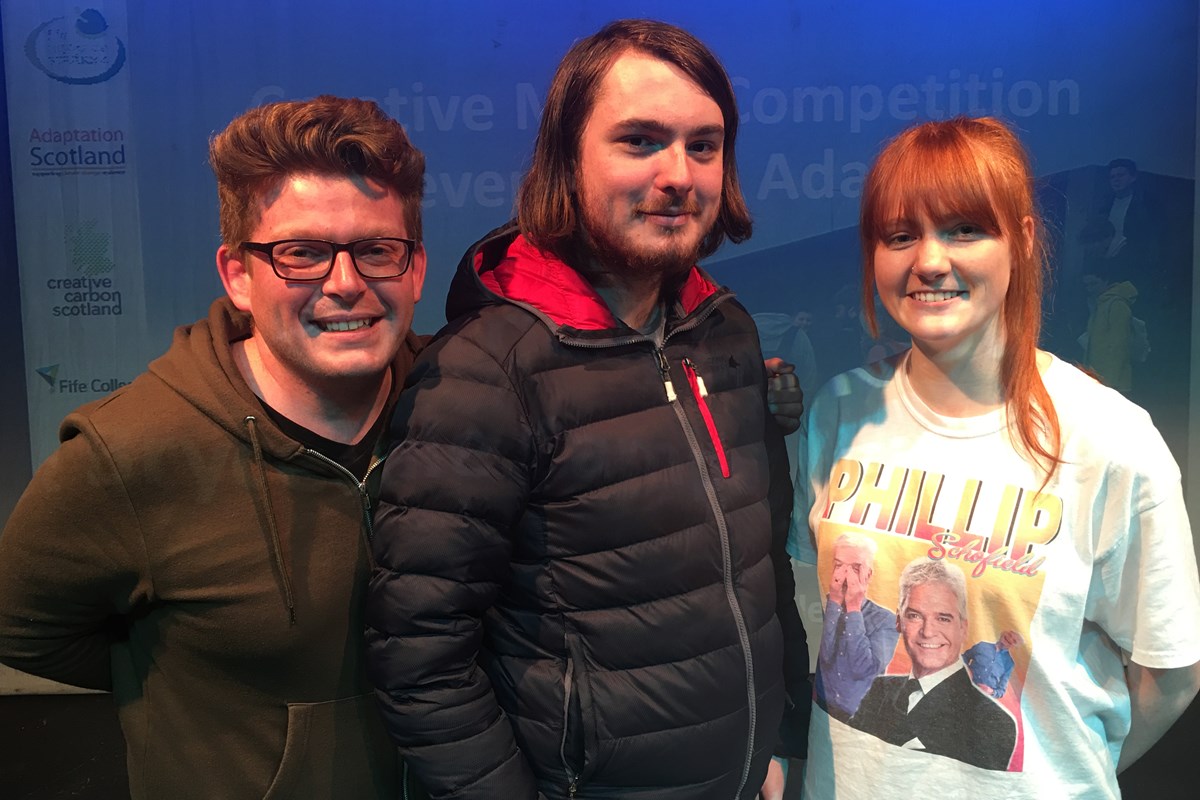 Four groups of creative students from Fife College have taken part in a unique competition to raise awareness of climate change and adaptation in the Levenmouth area and in particular the River Leven.

The groups were set a live brief to look at ways to promote climate change to local people which would make an impact and help to clean up the river and promote good practice in the community. Within a timescale of just 48 hours, which included visits to the river at various points, the groups put together their creative solutions choosing song, adverts and film as their mediums

Sixteen students, all studying NC Acting and Theatre Performance, relished the task, some working in to the small hours to get their creative ideas edited and finished in time for the judges. All four groups presented their finished pieces to the judging panel at the College’s St Brycedale Campus theatre space in Kirkcaldy.

The River Leven Catchment Project is a very ambitious plan for the whole of the river catchment, from Loch Leven to Leven. Fife College is an enthusiastic supporter of the project, and this Creative Minds exercise was the first engagement with the College students.

John Wincott, Environmental Services Coordinator was delighted with the final student presentations and said: “The performing arts students were set the task of producing a media project centred around the immediate Leven area that highlighted the concerns around climate change and adaptation. It’s fair to say that at the final presentations the whole audience was amazed at the quality of the output from the students.

“All four groups produced different styles of productions and every one of them was exceptional, producing heartfelt messages that left the audience emotionally connected to the message.”

The winning team, Cameron Tait (27) from Blackburn, Daniel Morrison (21) from Kirkcaldy, Fiona Howe (19) from Kinglassie and Robert Ryan (20) from Falkirk, produced a polished product in the form of a ‘mockumentary’ combining humour with serious messages about climate change and the needs of the Leven area.

The runner up group approached the subject totally differently, by writing an original song, and then recording it for the presentation which was also impressive.

Dougi McMillan, Director of Creative Industries at Fife College said: “This has been an extremely successful project – the four groups produced fantastic pieces of work in very tight timeframes which is testament to their creativity, passion for the subject and hard work.

“This is the first collaboration between Fife College and the River Leven project - our students have set a very high standard and the experience has been very valuable. Going forward we look forward to working on similar projects which benefit our students and the local community.”

Cameron, who starred as a TV reporter in the winning mockumentary, said:

“We learned a great deal making this film. When you think of climate change you always think about what is happening in other countries and the effect it is having on the ice caps and the polar bears for example. This project made us think about the effects it is having right on our doorstep in Levenmouth – we decided to put this over in a fun way so that more people could relate to it. Hopefully this will encourage people to recycle more and change their habits to improve the environment.

“We wanted to think outside the box with our idea - the timeframe was challenging but we are all glad we took part. It’s unfortunate that Robert our other team member was unable to attend the presentation today – he wrote the script and developed a lot of the punchlines and humour – he’ll be chuffed to hear we won.”

To find out more about courses at Fife College, including those beginning in January, visit fife.ac.uk or call 03442480115