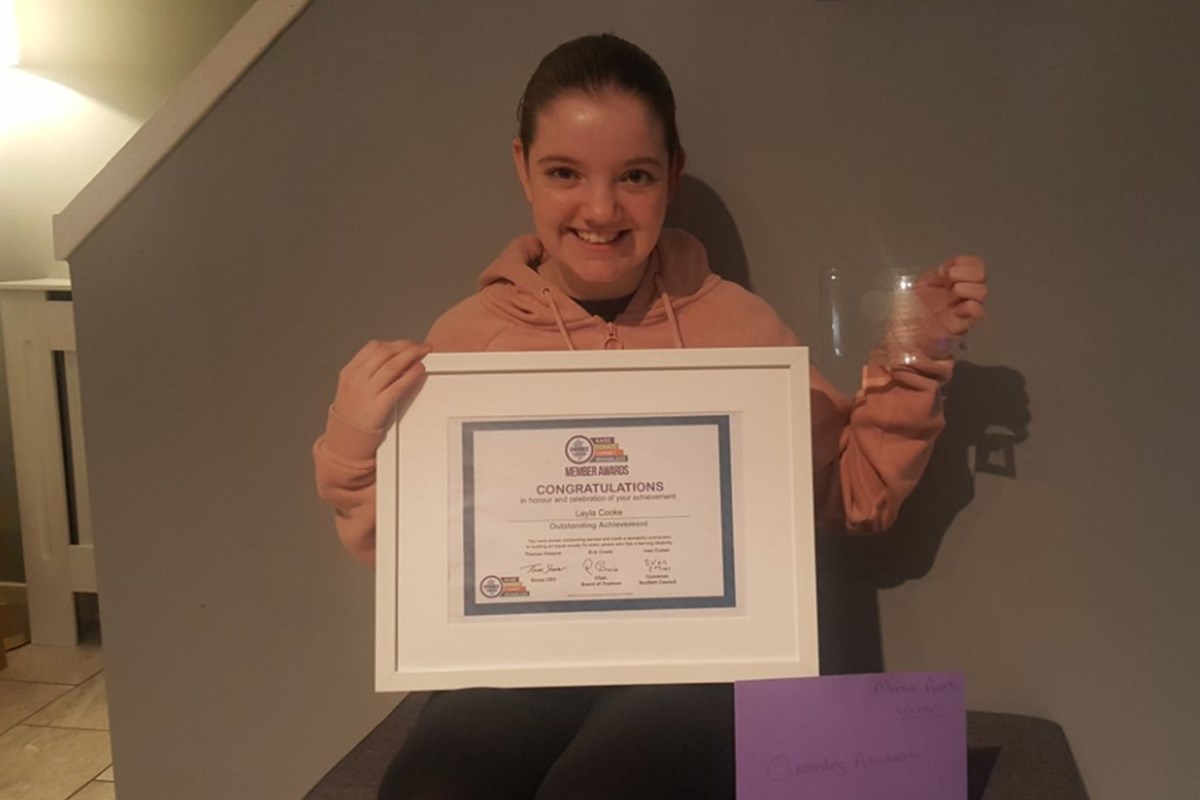 One of Fife College’s youngest students has been officially recognised for her incredible work in promoting British Sign language (BSL) after receiving the Outstanding Achievement award from Enable Scotland, a charity that supports people with learning disabilities and their families.

Layla Cooke, 14, is one of the youngest students at the College, attending evening classes to study BSL Level 2 (equivalent to National 5). Layla suffers from hearing loss and anxiety but has been using her disability to educate others.

The young teenager has been learning BSL for over a year since her hearing deteriorated and has been raising awareness around issues surrounding hearing loss, BSL and mental health. She’s been doing this through her educational social media channels.

Setting up a Twitter page in August dedicated to teaching others BSL, Layla has already won over a number of fans, including renowned musician, Lewis Capaldi, who recently featured in one of her videos.

Layla uploaded a video to Twitter with Lewis in which she taught him how to sing ‘Happy Birthday’ in sign language.

When not rendezvousing with international stars, Layla has been populating her social media timelines with videos that teach her followers how to sing songs in sign language, as well as basic words and phrases. In addition to this, Layla has been selflessly devoting her time to teaching a family to sign through Enable Scotland.

Layla’s inspiring work has also seen her make an appearance at Perth’s Christmas light show where she performed songs in BSL. With more such events planned in Layla’s diary for December, it’s going to be an exciting climax to the year, and beyond, for the youngster.

Of the award, Layla said that she was “delighted” and “lucky” to have won considering that “there were so many people out there who deserved it.”

Layla started her social media channels because she felt that one of the issues of being deaf is that most people don’t know sign language:

“It would be good if more people knew some sign and I think that if I want things to change, I need to start helping people learn it. It makes a massive impact in my life. It’s extremely helpful even to know some basic signs.”

Going on to share some of her upcoming plans, Layla said, “I have so many exciting things coming up. Some which I can’t share yet but I am due to be in Rejects, Kirkcaldy at the start of December to sign more songs. I have another big event in December and more exciting times are ahead in the very near future.”

Does full-time study not suit you? Fife College offers a range of evening and weekend courses from Business Management to Digital Design and Web Development.

Applications to study at Fife College for the 2020/21 year are now open!

For more information on all of our evening courses, click here!